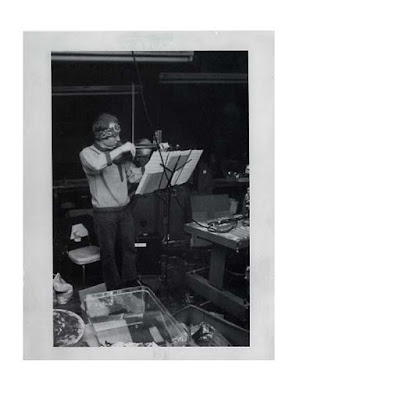 2016 repress. "Henry Flynt took a high-brow approach to so-called low-brow music. Combining sounds from his native North Carolina with an avant-garde sensibility honed in New York City's loft scene in the 1960s, Flynt created what he describes as 'new American ethnic music.' As a student of Hindustani singer Pandit Pran Nath alongside La Monte Young and Terry Riley, an associate of the Fluxus movement, and even a live collaborator with the Velvet Underground, Flynt was a part of one of the 20th century's richest art and music milieus. Graduation, recorded between 1975 and 1979, was meant to be the debut of his avant-garde hillbilly music. The album's title track is a slow, twisted ballad that unfolds like a funeral dream over dirge-like country riffs. 'Celestial Power,' the album's 20-minute closing track, is an entrancing minimalist composition performed strictly with oscillating vibrato guitar. As Flynt explains, 'I aspire to a beauty which is ecstatic and perpetual, while at the same time being concretely human and emotionally profound.' Shelved upon its completion in 1980, Graduation was not released until after the turn of the century. In 2013, it still sounds years ahead of its time." (SUPERIOR VIADUCT)