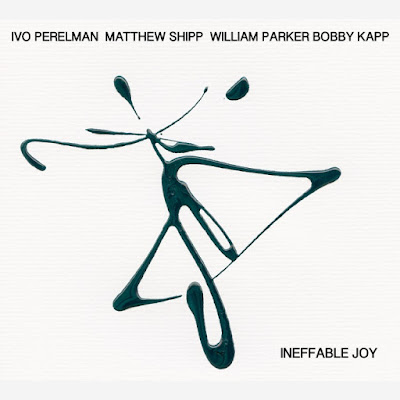 Release date: October 25, 2019 - available for pre-order
Prolific tenor saxophonist Ivo Perelman wanted to be on ESP, because ESP's 1967 Gato Barbieri album In Search of the Mystery was an important record for Perelman, both being South American tenorists of an avant bent. So it is no coincidence that the drummer on In Search of the Mystery, Bobby Kapp (who's also on Noah Howard's second ESP-Disk', At Judson Hall (1968)), mans the kit for the present album. For that matter, the bassist, William Parker, made his recorded debut on ESP as well, playing on Frank Lowe's Black Beings (1973). And Perelman has a twenty-three-year/thirty-three-and-counting-albums collaboration with pianist Matthew Shipp, who's been associated with ESP since 2015. Kapp and Shipp are on Perelman's 2017 Leo album Tarvos, Parker and Shipp have made multiple albums with Perelman, and this is even the second time out for this quartet, after 2017's Heptagon (Leo). Somehow, though, their interplay remains fresh. Of course each player has particular gestures and general textures that recur from time to time, but like a kaleidoscope, each turn finds familiar elements recombinating into new patterns. Parker, Perelman, and Shipp frequently interweave spontaneous melodies of dazzling complexity. The free-bop of the rhythm section introduction to "Jubilation" is an unexpected delight. Kapp's skittering accents throughout are a lesson in setting a pulse without being obvious about it, with "Bliss" being a prime example. "Exuberance" crowns the album in particularly ecstatic fashion, the four players' unique and distinctive styles coming together in an exultant expression of creative freedom that's communicative and accessible. (from the liner notes)
Personnel: Ivo Perelman, tenor saxophone; Matthew Shipp, piano; William Parker, bass; Bobby Kapp, drums. Recorded April 21, 2018 at Park West Studio. Jim Clouse, engineer.

Press Quotes (re: Heptagon): "Kapp is an excellent choice as Perelman's assessment is on the mark...'he's very sensitive to time and space. He is dancing at the drum kit...' And while the frontline rolls along with the improvisational game-plan, Kapp's buoyant timekeeping faculties add a poetic quality to the rhythmic foundation along with Parker's resonating lines and fluid attack. The artists do what they do best by creating on-the-fly works without following any rigid agendas..." - Glenn Astarita, New York City Jazz Record
"...one of the most finely realized of the albums that Perelman has released this year. It's a gem, and open eared modern jazz fans shouldn't miss it." Tim Niland, jazzandblues.blogspot

"this band feels extremely balanced and dancing. "Part One" finds Kapp and Parker locking into a delightful feeling of free time that is nevertheless in 4/4, and Shipp and Perelman connect above this like old friends." - Will Layman, PopMatters 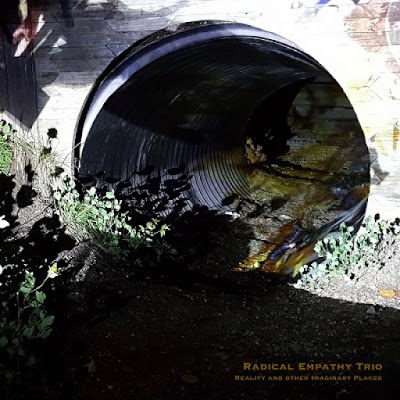 This album was recorded during Thollem's 2017 residency at Brooklyn-based multi-discipline mecca Pioneer Works. It's the second by Radical Empathy, which combines three uncategorizable improvisors. Michael Wimberly has been astonishing folks since his days in Charles Gayle bands and Steve Coleman & Five Elements in the early '90s, and has gone on become a composer and educator of note. Nels Cline has spent decades changing people's ideas about the role of the electric guitar in multiple contexts, ranging from Wilco to Anthony Braxton (think about that!) as well as many projects as a leader; this is his fourth album in trio with Thollem, and a fifth will follow next year, also on ESP. The heavy electronic sound of the first track, with its swathes of distortion, puts it very much in Noise territory, with Wimberly contributing coloristic accents and heavier flurries of rhythmic activity. After the twenty uncompromising minutes of "Collective Tunnels," for "Conscious Tunnels" Cline switches to a guitar tone John Abercrombie wouldn't shy away from and Thollem sits down at an acoustic piano (for a while) -- though their free improvisation is just as uncompromising. The timbres cease pacifying jazzers when blippy 1950s electronic sounds slinkily slither from the speakers. Then the piano comes back, but the guitar's tone gets dirty. Genre boundaries are crushed underfoot as the moods continue to vary wildly as "Conscious Tunnels" covers an amazing breadth of timbres and textures.
Personnel: Thollem McDonas, keyboards; Nels Cline, electric guitars; Michael Wimberly, drums. Recorded by Justin Frye at Pioneer Works, Brooklyn, NY Sept. 13, 2017.

Press Quotes:
"Subtle alterations, treatments, processes. Relentless kinetic energy. Above all, an appreciation for how to find and hang on to your place in a narrative unfolding at speed. For the fact that structure is not what is imposed, but what is revealed." - Fred Frith (liner notes for the first Radical Empathy album, released on Relative Pitch in 2015)
"Church jams and death rays, soap operas and noir escapes, psychedelia and electrocutions -- no matter where the conversation turns, ...McDonas and... Cline are right on top of it. The tumbling, rattling drums of Michael Wimberly ...lend this improvising trio the feel of the '60s avant..." - Greg Burk, MetalJazz
"This moody and wonderful album...is an excellent example of three fellow travelers listening deeply to each other and creating an album of mesmerizing depth and texture." - Paul Acquaro, The Free Jazz Collective
"Thollem is a bruising virtuoso who has deconstructed free music, classical, blues, electronic music, prog, noise, and everything in between." - Brad Cohan, Bandcamp
"Thollem might be a musician, or he might be some kind of wizard scientist...the experience might melt your mind." - The Denver Westword
"A true guitar polymath, Nels Cline has tackled everything from gothic country rock with the Geraldine Fibbers to a full remake of John Coletrane's late improvisational masterwork, Interstellar Space." - Rolling Stone, "Top 100 Guitarists"
"With a career starting in the late seventies and over 100 albums under his belt, Nels Cline is one of the most influential guitarists and composers today." - NPR

音楽 ： Tales from the Skinny Apartment(ESP-Disk') 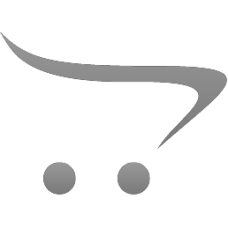 Tales from the Skinny Apartment

PRE-ORDER!!
Release date November 8, 2019
Painted Faces is the long (strange/trip) running voyage of weirdo David Drucker, began in Florida in 2009 and decamped to NYC in 2011. It has sometimes been a loose band in the past with a revolving lineup of outsiders and interlopers (known as The Freak Band), but is usually a solo endeavor, and the bulk of the recordings have been done as such. PF has always been a home recording solo project, one-man-band style heavy on psychOdelic/outsider folk/noise/experimental vibes. He started self releasing CD-Rs in the early days and quickly jumped to tapes on a variety of labels including Already Dead, Lava Church, J&C, Null Zone, Tall Tapes. A "legendary" CD compilation on Gulcher Records and an LP from Already Dead and Almost Halloween Time in Italy brings us to the here and now. Tales from the Skinny Apartment is somewhere around the 20th or so Painted Faces release...he has long lost count.
Drucker runs/curates gigs (and records at) the Skinny Apartment, his dwelling place in Ridgewood Queens, which some folks have called the "realest DIY zone in NYC." He also rips in Dead River Company, Big Hiatus, Shecky, Canyon River Blues and countless other unknown subterranean improv zoner outfits. "Ripping" involves keeping it freaky and weird and ripping sets wherever/whenever, ie always being down to perform whether in a kitchen or a packed ballroom....no diva bullshit, just plugging in (or going sans electricity) and playing...always giving it your all...Ridgewood Rippers are the crew of artists that populate Ridgewood and the loose "scene" around the Skinny Apartment...much of it is in jest, a self-inflated mythology of nonsense which is pervasive in all rock and roll "scene" histories. As a student of rock/pop history, Drucker is fascinated by the loose associations that connect folks from various zones together...i.e. Miles Davis and The Grateful Dead...it's all the same though, the labels and genre distinctions are completely arbitrary. We're all in this together, now more than ever...to be a "ripper" is simply to "rip"...no nonsense!
Painted Faces has toured all over the USA and Canada numerous times, spreading the ripper gospels, and is gearing up for the second European tour with fellow ripper Anura. He is known for falling apart on "stage," with performances heavy on humor, horror, stoned digressions, and cathartic bouts of therapy, part performance art/part standup comedy, eradicating the lines between performer, performance, and audience one show at a time.
Tracklist
1. Chicks That Are into Beefheart (and Jandek) 3:24
2. Florida Bat Salad 1:05
3. Nightmare on Drucker Street 4:37
4. I Took Too Much Acid in 7th Grade 4:22
5. Island of Tragedy 3:04
6. Follow Me Down on Instagram 1:58
7. Seafood Special 3:59
8. My Mom Was a Hebrew School Teacher 4:14
9. Massachussetts Is a Magical Place 4:21
10. The Ridgewood Ripper 5:18
11. I Don't Want to Listen to Your Tape (Cellar Dweller) 8:23
Total time 44:35

All Music Written & Recorded by David Drucker at The Skinny Apartment in Ridgewood, Queens, 2017
Featuring Mike Green (Mezzanine Swimmers) on guitars on "I Took Too Much Acid in 7th Grade"
Cop Funeral on electronics on "Seafood Special"
Chris “Mr Transylvania” Shields on background vocals on "Massachussetts Is a Magical Place"
Eva “Nighttime” Goodman on violin & backing vocals on "The Ridgewood Ripper" 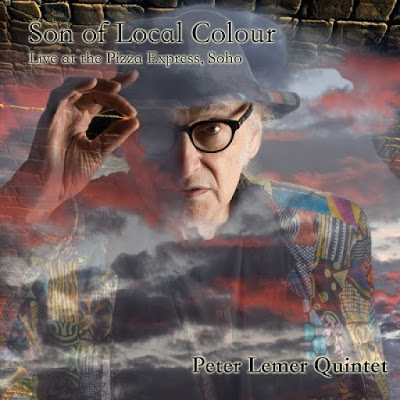 The core of this group – four of the five musicians listed below – recorded an LP for ESP-Disk' in 1966. The plan, conceived the year after the 50th anniversary of the recording session, was to reunite the original quintet, which had existed for six months back in '66, but unfortunately Nisar Ahmad (George) Khan, tenor saxophonist on the original album, came down with something and couldn't appear. Alan Skidmore (Lemer bandmate in SOS) was deputized and, as all familiar with his career would expect and you will hear, came through with flying local colours at the concert on February 20, 2018 at noted London jazz club Pizza Express. Four months later, Jon Hiseman passed away at age 73 after battling a brain tumor. Five of the original album's six compositions are reprised, but with more room to stretch out on them in the concert context. New to Lemer's ESP discography are Lemer's tribute to British saxophonist/frequent Lemer bandmate Dick Heckstall-Smith, "Big Dick"; Surman's "URH"; and a wild interpretation of Coltrane's "Impressions."
Personnel: John Surman, baritone and soprano saxophones; Alan Skidmore, tenor saxophone; Peter Lemer, piano; Tony Reeves, double bass; Jon Hiseman, drums

"Peter had conceived his compositions in era before the term jazz-fusion had come into common currency and their success lies in the clever blending of arrangements and definable themes while allowing space for cutting edge improvisation. ... But it was on John Coltrane’s high-flying 'Impressions' that the group moved into top gear with brilliant soprano solos from Surman an[d] ever more heated tenor from Skidmore, not to mention an explosive Hiseman interlude." - Chris Welch http://chriswelchonline.com/peter-lemer-quintet/