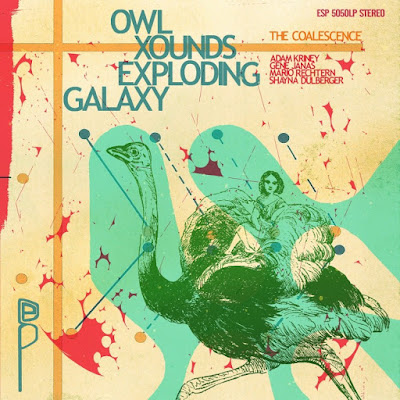 Owl Xounds were an undeniable force in the early 2000s NYC underground free-jazz/improv scene. Their Cow on Mushrooms album was selected as one of the top Jazz/Improv records of the year by magazine The Wire in 2005. They were deeply influenced by and sonically indebted to the early wave of 1960s avant-garde jazz from such legendary cult labels as BYG Actuel and, yes, ESP-Disk’. Their intense and energetic performances/recordings would propel their fanbase far beyond the improv/jazz world and deep into the global noise/experimental freak scene. The driving forces of this band were Kriney and Janas, who recorded as Owl Xounds (with Sun Ra Arkestra-esque variations on the name) with dozens of heavy hitter musicians including Thurston Moore, Peter Evans, Arrington de Dionyso, Darius Jones, Sam Kulik, Dave "Smoota" Smith, Gene Moore, Greg Vegas, etc. – and, not least, their brilliant collaborators on this album. Kriney, a devout DIY creator of albums in the first decade of the 21st century, notably as the leader of La Otracina, already had an ESP-Disk’ logo tattoo then. Later he also led a number of rock bands, notably psychedelic warriors The Golden Grass. Jazz elder Janas, a bassist in the Henry Grimes tradition, had been on the avant-jazz scene since the ‘60s and was a member of the legendary downtown NYC band Sedition Ensemble with Bern Nix and Dewey Johnson. Mentored by William Parker, Dulberger’s profile has become much more prominent in the decade since, including work with radicals Cellular Chaos. The fiery Rechtern is a Frank Wright-fierce saxophonist, born in Berlin, who played in the Open Rehearsal Black Music Orchestra at the University of Wisconsin in the early 1970s, and later in Direct Composing Orchestra in Vienna and in Fritz Novotny’s Reform Art Unit. Other material from this 2007 session was released as Splintered Visions on the Blackest Rainbow imprint in 2011. This is Owl Xounds’s 15th release.

The Coalescence is the first in a new ESP-Disk’ series of highly limited edition vinyl releases by today’s artists. Designed to allow ESP to put out material quickly during the current pandemic crisis so musicians can have very desirable releases to sell on their Bandcamp pages or other outlets, each record will be released in a limited-edition pressing strictly capped at 30 copies, housed in blank jackets with cover art overlaid – a style collectors of early ESP-Disk’ releases will recognize as a return to an old ESP tradition.